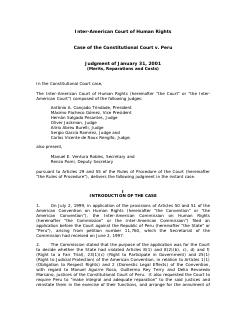 Description
The case before the court concerns the dismissal of elected justices from the Constitutional Court of Peru. The plaintiffs in this case request that the judges be reinstated and adequate damages implemented. The court further found that the Congress had ordered the reinstatement of the judges so the constitutional questions were solved. However, the court found that Congress failed to address the salaries and benefits that the judges possessed as elected officials. The court found that the dismissal of all justices constituted unlawful control over the law by the Congress when it sought to replace those members with a new set of judges. The court found that the state violated the elected judicial protections for the suspended judges and deprived them of their elected official benefits. The court order an investigation into the parties responsible for the violation, publication of those results, and reimbursement to the judges.